NC State prides itself on producing global citizens. Our students, faculty and staff travel around the world to engage with — and learn from — the international community. That mission is strengthened by the official opening of the expanded NC State European Center in Prague. What started as a study abroad opportunity for College of Design students is now a gateway to Europe for all of NC State.

In 1991, the College of Design began a summer study abroad program in Prague. Under the leadership of Marvin Malecha, the college’s former dean, that program became a year-round offering in 2005. This July, management officially shifted from the College of Design to the Office of Global Engagement, and in August the center moved to larger and more functional facilities in the heart of Prague. The European Center in Prague (NC State Prague for short) is NC State’s first permanent overseas facility. 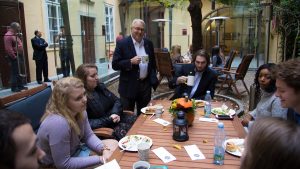 On Oct. 18, NC State Prague faculty, staff and study abroad students welcomed Chancellor Randy Woodson and other NC State leadership to the Czech Republic’s capital to mark the inauguration of the NC State European Center in Prague. During the grand opening ceremony, Chancellor Woodson and attendees learned more about the unique interdisciplinary atmosphere of NC State Prague and heard from Director Peter Kjaer about the renewed vision for the center.

“This historic event marks an evolution of NC State’s international role,” Chancellor Woodson said. “The NC State European Center in Prague is NC State’s portal to Europe, to the benefit of students, faculty, researchers and society at large.”

The NC State European Center in Prague is NC State’s portal to Europe, to the benefit of students, faculty, researchers and society at large.

The expansion of the NC State Prague facility helps to fulfill NC State’s vision of increased international engagement for its student body. Currently, some 200 NC State students study abroad in Prague each year. With the larger facility and the support of the Office of Global Engagement, NC State Prague will be better positioned to serve even more students who are interested in broadening their horizons.

“Prague is an ideal location for NC State to have a permanent presence,” said Addley. “With its location in the heart of Europe, along with a rich history and culture, we believe students across NC State’s colleges can benefit from NC State Prague.”

With the center now serving the whole university, an associate director position was created to focus on new program development and international connections for NC State faculty and students. Associate Director Megan Winzeler is excited for the new direction of NC State Prague.

“We have a dedicated and dynamic team that is working alongside faculty and partner universities in Prague to develop innovative programs that will take NC State’s global engagement to the next level,” said Winzeler. 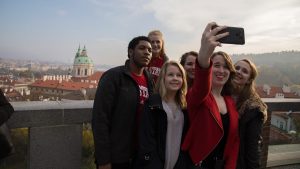 Traditionally, the center has focused on providing programs for study abroad students. But the reorganization and expansion also gives NC State faculty increased access to the facilities’ resources for international symposiums, seminars and other learning opportunities. And faculty will also benefit from key strategic partnerships with major universities in Prague.

During the inauguration, Chancellor Woodson signed agreements to formalize and expand relationships with three local universities: Charles University, Czech Technical University and Czech University of Life Sciences. These partnerships will open the door for NC State students to engage with other cultures — and promote global collaboration through international research and faculty exchange.

NC State is connected with more than 130 institutions around the world and pursues research in more than 90 countries on all seven continents. Developing partnerships with these three Czech universities will offer NC State faculty the opportunity for enhanced research initiatives with those universities and the greater European academic community. Examples of how faculty can get involved with partner institutions in Prague include co-teaching, facilitating symposia and joint publications, to name a few. 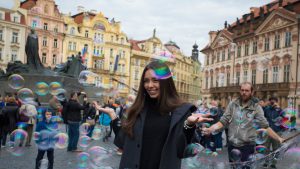 “The inauguration of NC State’s European Center in Prague is an exciting opportunity to elevate it to a university-level center,” said Senior Vice Provost for International Affairs Bailian Li. “With more than 12 years of history from the College of Design as a study abroad site, NC State Prague now serves all NC State students and supports more faculty exchange and research with partners in Europe. With the expanded mission, NC State Prague serves as a hub for NC State to develop close collaboration with partner universities in Prague and surrounding countries in Europe.”

Under the expansion, Kjaer will continue to direct NC State Prague with several professional staff based in Prague, along with nearly 20 European faculty who teach courses every semester. Winzeler and Addley will remain on NC State’s campus in Raleigh to develop new programs and to serve as the first point of contact for students considering studying at NC State Prague.

One response on “NC State’s Gateway to Europe”

The University Standing Committee Survey is available online now through Monday, February 1 at 5 p.m. Benefit-eligible employees in a .75 or greater FTE position, along with emeritus/emerita faculty, may serve on a university standing committee.