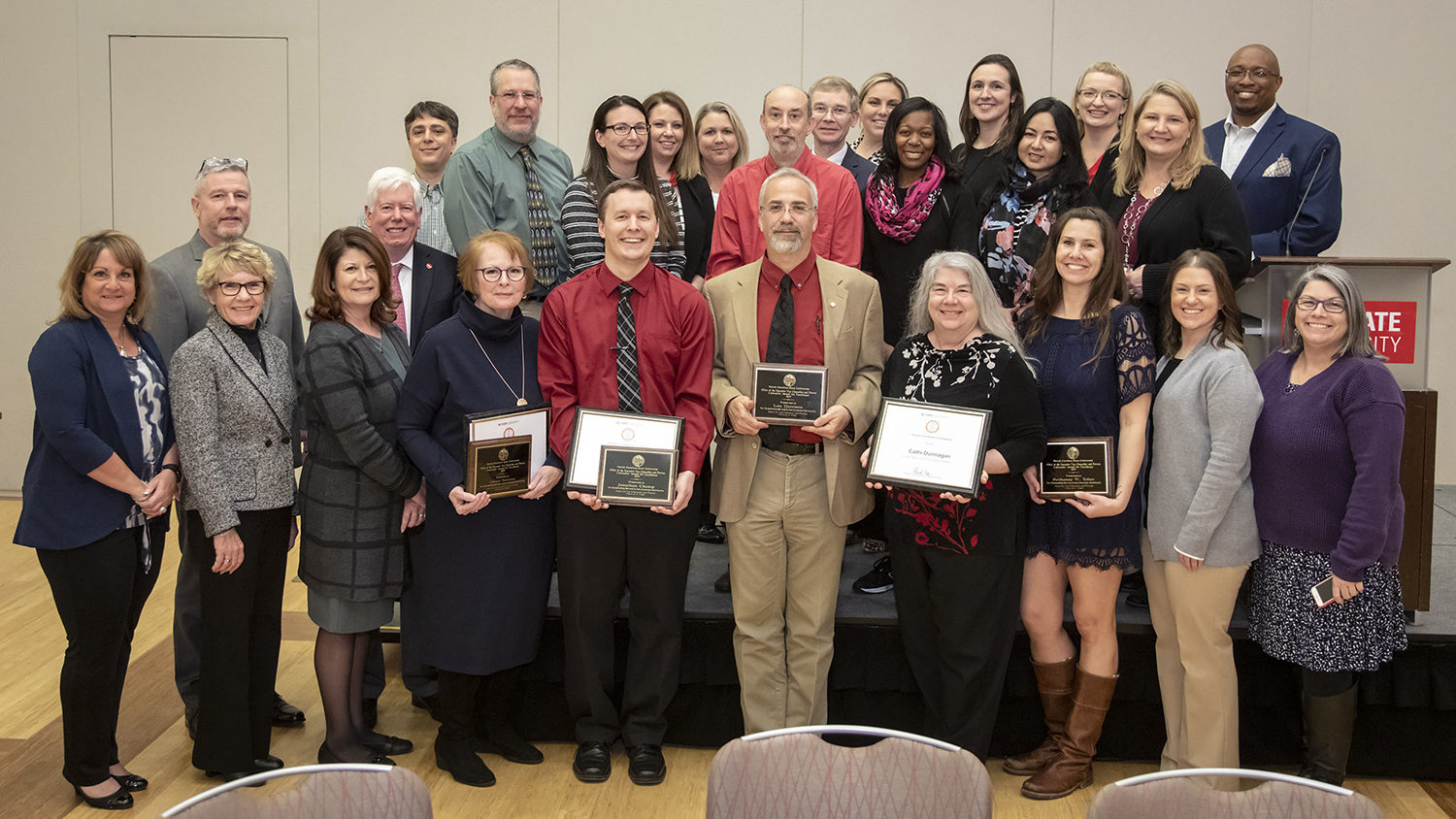 The Office of the Executive Vice Chancellor and Provost recognized 12 outstanding staff members at the 2019 Provost’s Unit Awards for Excellence on March 26.

This year’s recipients of the Provost’s Unit Awards for Excellence are:

In her role, Acker handles many different responsibilities that include teaching, program oversight, employee supervision and oversight of operations. In 2017, she represented the College of Textiles in Prague for First Year Inquiry by teaching the SLC 250 course that she developed, “Critical and Creative Decision-Making Models.” During her time at the European Center that summer, Acker developed a new multidisciplinary minor in global leadership for NC State students. The offering of this minor, she believed, could provide a unique benefit to NC State students while also capitalizing on NC State’s newly expanded European Center, therefore setting the university apart from its peer universities. The proposal received a great deal of support and interest among her faculty colleagues and gained approval in less than a year’s time. The minor in global leadership is set to be offered for the first time in Spring 2020. Acker’s colleagues offer that she exemplifies the spirit of going above and beyond in her work. She has already mentored and led faculty teams through the initial preparation for this exciting new minor, and served as an excellent ambassador for NC State and for the state of North Carolina while in Europe.

Champ has made outstanding contributions to the workplace at DELTA as a model of collegiality, and at NC State, where he has actively worked on a parental leave policy for the university for over two years, striving to bring the very real issue of the lack of adequate parental leave for new parents to the attention of decision makers. He also plays an integral role in helping DELTA’s senior management team report accurate enrollment numbers for funding. Previously a by-hand process, he worked with the Office of Institutional Research and Planning to automate the process and ensure that official enrollment numbers match. He is an above and beyond employee who is collaborative by nature, actively contributing code and bug fixes to the Moodle community and other open source projects, as well as sharing software development best practices. Champ always takes the time to listen carefully to client’s or colleagues concerns and will assist in finding solutions. He takes purposeful actions in DELTA to create community and build a positive work culture.

In his three years at the Libraries, Harnish has gone above and beyond in customer service and as a team member. To ensure continuing safety, he partnered closely with campus security to train and coach the Libraries guard staff, who are often the first faces that library patrons encounter. Often during adverse weather situations, he displayed a commitment to safety and security by volunteering to come in and open the Libraries in the morning, even though he may have just worked the night shift. Harnish manages all of the logistics that allow the Libraries to stay open and fully-staffed 24 hours per day, five days per week, and 361 days per year. His efforts result in great efficiency and predictability for Libraries staff and student workers. When colleagues request time off on nights and weekends, he frequently picks up their shifts for them, adjusting his own schedule to accommodate the needs of the Libraries. Harnish’s colleagues have shared their admiration for his ability to place the needs of others above his own and have expressed their pride and confidence in knowing that he “has their back” and is “on the job.”

Harrison has had a direct impact on the educational technology space at NC State. He has been a part of NC State for the past 36 years, 12 years as an undergraduate and a master’s degree student followed by 28 years as an employee. While in the computer science department, Harrison and his team developed WolfWare Classic, which was used at NC State for almost 20 years. At DELTA, he is a founding member of the Open Knowledge Initiative, and the use of the open-source learning platform Moodle is due to his leadership. Harrison has been heavily involved with learning analytics, a field that uses various data that is known about students to help predict a student’s success in a given course and more importantly, in using that data to identify students who may need additional support. He was recently named to the steering team for the Educause Student Success Analytics Constituent Group, a national group brought together to further the use of data to ensure student success. He has also been invited to speak at a number of engagements related to learning analytics in Edinburgh, Scotland, New Orleans and San Diego.

Simison works tirelessly to enhance the quality of the workplace, working as an advocate on behalf of all of the unit’s employees. Because she has helped to shape a work culture that attracts and retains the best talent, the turnover rate is virtually non-existent in DELTA, where employees embrace respect for each other, their customers, and for the betterment of the greater community. Simison champions an environment where work-life balance and collaboration are the norm. She truly cares for all employees’ well-being, and she is the consummate HR professional. She has been a Wellness Champion in DELTA and developed its Wellness Plan. Because of her efforts, DELTA was recognized for its efforts in creating an active workplace and culture of wellness. Since 2008, she has been guiding and supporting the division, advising and resolving issues regarding staffing, position management, organizational development, recruitment and hiring, leave administration, and employee relations and performance. A constant advocate for diversity and inclusion, Simison strives to attract and retain not only the best workforce, but a diverse and inclusive one.

During her time in DELTA, Tobey’s excellent organizational skills and efficiency have resulted in improvements in existing services, successful leadership of large and complex projects and the creation of a new course quality assurance program for online and blended courses at NC State. This innovative program has resulted in eight courses becoming Quality Matters (QM) certified, a recognition of national importance that raises the profile of our distance education programs. Tobey became a champion and a driver for the implementation of a QM-based quality assurance program at NC State. She developed a business plan for the implementation of this new service, including grants that would need to be given to faculty to help support the time it would take them to go through the QM process and have their courses reviewed by peers from other institutions. Upon approval of the plan, a pilot effort proved successful, which led to it now being offered as an ongoing service provided by DELTA to ensure the quality of its online courses. In 2018, the UNC System Quality Matters Council was formally established and was charged to “facilitate consensus and collaboration towards a system-wide goal of improving digital pedagogy.” Tobey was named as the central region representative and, more importantly, the course review coordinator for the entire system. Nationally, thanks to Tobey’s leadership in Quality Matters, NC State has been recognized by QM, a nonprofit, quality assurance organization, for its work in improving online courses.

Each winner received eight hours of paid leave, an engraved plaque and a check for $250. They will go on to represent Provost’s Office units at NC State’s University Awards for Excellence in June.

Warwick Arden, executive vice chancellor and provost, along with Mary Lelik, senior vice provost for institutional research and planning, presented certificates to each of the following nominees:

One additional finalist for senior vice provost for Enrollment Management and Services has been selected for virtual campus interviews. which will take place the week of May 10.

NC State honored winners of the 2020-21 University Teaching Awards in a virtual ceremony on Apr. 21.