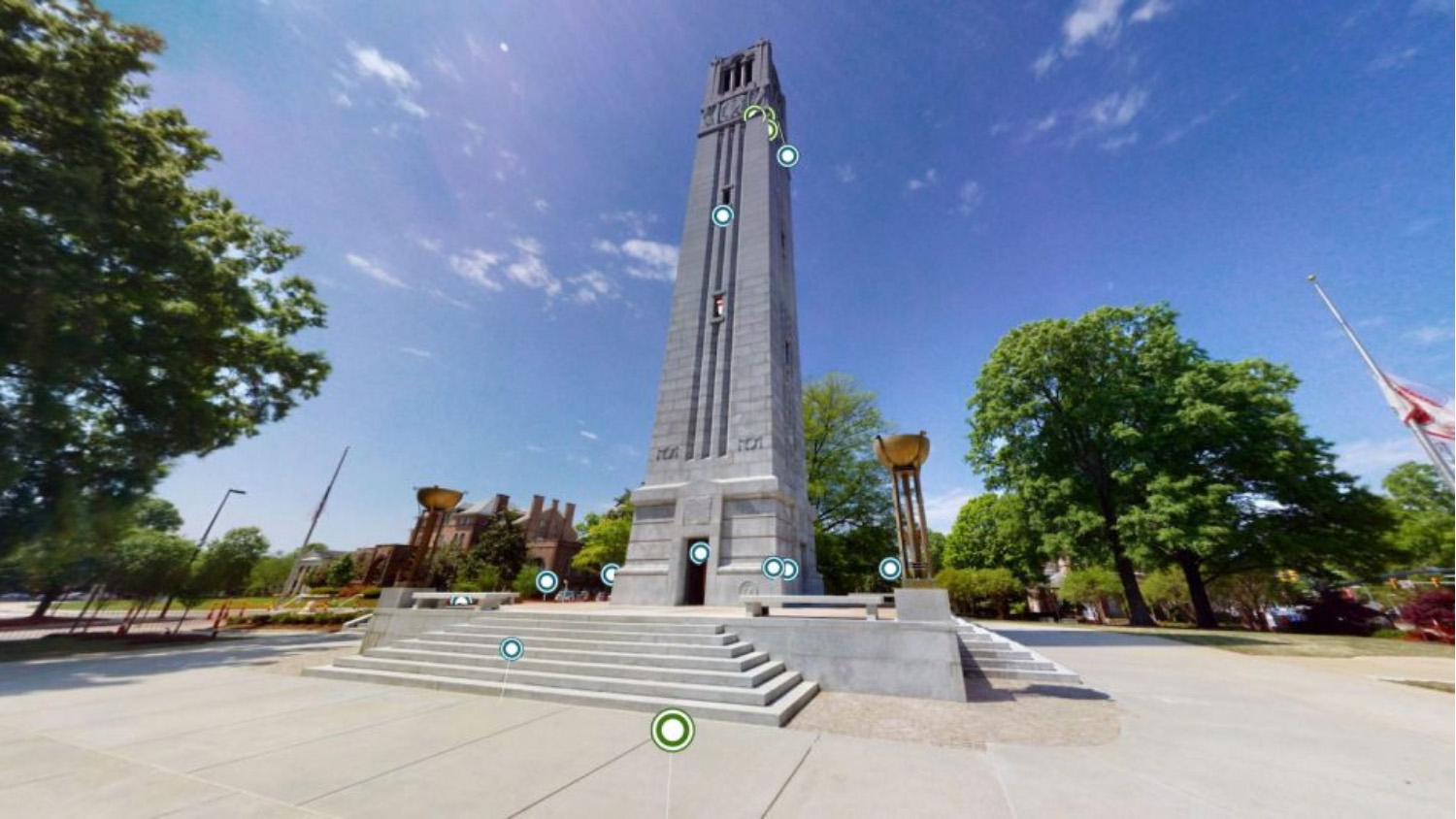 DELTA Creative Director Mike Cuales slowly ascended the interior of the NC State Memorial Belltower 10 feet at a time, capturing each point along the way in 360° degrees as he made his way up to the belfry. On the ground, Immersive Media Developer Stephen Waddell stood outside with a DSLR camera, pausing between waves of graduates smiling for photos as he photographed all 115 feet of the monument’s exterior to examine later. A few yards away, University Library Specialist Colin Keenan gathered precise photographic data about the tower’s plaque and cornerstone. Their joint efforts in April would combine to create a first-of-its-kind immersive tour and digital archive of NC State’s Legend In Stone.

Originally built to honor the NC State alumni who lost their lives in World War I, the Memorial Belltower has become a symbol of inspiration to the Wolfpack community. The university wanted to do something special to honor its rededication this May, signaling the end of some 100 years of construction and, recently, renovation. With students, family and alumni spread out across the country and around the world, NC State needed a special way to engage and educate a broad audience around the historic preservation.

University Marketing Coordinator Christine Monahan already knew DELTA could deliver after our staff debuted NC State’s Red and White Week in augmented reality, so she reached out to Cuales and the Libraries to create a stunning virtual experience for the Belltower. For DELTA, this was an exciting opportunity to both support the university and explore research interests such as photogrammetry, 3D design, LiDAR and large-scale exterior scanning. It was also a chance to highlight the potential of digital preservation, a rapidly growing method to preserve and study real-world materials in digital form.

“[Our university partners] knew that they could bring this to us and do a technology consultation and that there would be a wide range of options. We were able to understand what was most important to them, which was putting people on the ground at the new site, and they kept referring back to the development and immediate experience, but also the archival purposes,” says Keenan.

The team was largely inspired by The Gregg Museum’s virtual tour, created by DASA Marketer and Web Developer John Starbuck, which was in the works just as the COVID-19 pandemic closed our campus (and as a number of new exhibits arrived). Wanting to help patrons experience NC State’s art museum from home, Starbuck scanned each exhibit individually. He then added digital annotations for each piece of artwork to tell a story like a virtual tour guide, creating a digital archive of the museum while providing an engaging online visitor experience.

With this success story in mind, an open-minded approach and a number of high-tech tools at their disposal, Cuales, Waddell and Keenan got to work.

“We weren’t sure what was going to work best, at least out of the gate, so we went in applying a range of technology and then very quickly tried to drill down to the most plausible, fastest route to a guaranteed end product, and that wound up being the Matterport scan,” Cuales explains.

Inside the Belltower, each shot involved Cuales placing the Matterport camera, triggering the scan, hiding out of view and then moving the scanner 10 feet to start again.

“Throughout the tower and the belfry and the exterior, when it was all said and done, we probably did well over 100 scans. But in the end, it [took] about 80 point scans in order to generate the Matterport tour,” Cuales explains.

The result was a digital replication of the Belltower that viewers can virtually “climb,” reaching heights that are impossible in person and opening doors to more autonomous tours in the future.

“One of the things that was brought up was the concept of having something independently navigable, so you could upload this into a game engine and ‘walk’ around it and look at it from different angles and not have this curated view. In a way, that gives you a really tremendous store of archival information in of itself, because you’re not just preserving one particular context,” Waddell says.

To capture the Belltower’s exterior, including the historic plaque and cornerstone, the team used LiDAR and high density photogrammetry models. LiDAR, Light Detection and Ranging, uses the pulse from a laser to collect measurements which are used to create 3D models and maps of objects and environments. Photogrammetry is the art, science, and technology of obtaining reliable information about physical objects and the environment through processes of recording, measuring, and interpreting photographic images. The team used Artec LEO for preliminary testing of lighting environment and material qualities, and created the final exterior scan with the Leica BLK360 Imaging Laser Scanner.

“We were completely new to the use of this high-end laser-based scanner for the exterior, so we had no idea if we were going to even be able to see the top of the Belltower or how far that laser would actually travel. It was a big exploration. We took other projects that we’ve done on campus and we pulled from those experiences and applied it to this very unique space,” Cuales explains.

“I think this takes everything that works within the Gregg Museum [and adds] a higher degree of technical difficulty, in some places doing a sheer vertical,” Keenan adds. “I just think that’s so interesting –– to take something that was done a little while ago and has shown to have worked in a big way.”

In addition to the claustrophobia that comes with scaling the inside of the Belltower, the team encountered several challenges, the greatest being time. They coordinated with various university staff to ensure an empty space for a short time and created the best product possible within this window. Fortunately, DELTA has a good deal of experience in executing projects like this one. Cuales was assisted by his colleague and former College of Design classmate, Mark McLawhorn, who now serves as a creative director in University Communications.

“I feel like we were really well prepared to just solve whatever problem came up. We had multiple approaches, we had multiple technologies, we had multiple people with very different expertise who were all aligned to the same end goal. Given more time, there’s so many more things that we can figure out and make fantastic. So it felt like a constraint, but it was probably a good thing to drive decision-making, to drive innovation, to drive the product release and development,” shares Cuales.

To further enhance the experience for viewers, the team added text annotations detailing the history of the belltower and its construction. Alongside Keenan, Monahan and Waddell, Senior Development Writer Lisa Hall and student worker Parker Mitchell compiled university archives and primary sources to inform the annotations.

Everyone’s hard work paid off. The virtual tour has garnered more than 900 virtual visitors since it opened in May. In collaboration with the Libraries and other campus partners, DELTA plans to continue to take immersive technologies at NC State to the next level.

“Our hope for the future is a really sustained effort to innovate in all the different ways we can leverage immersive technologies to connect people with real world spaces. People are remote, they were displaced from campus, and I think that was one of the big drivers of why we were approached to help with this –– that sense of wanting connection to the campus,” Cuales says.

Keenan is excited to lean on and add to DELTA’s expertise as he works to document and inform how these types of technology are used. “Putting professional experience into the instructional documentation being made by a library is really unique. Nobody was doing that for video in 2005 before YouTube, and that’s kind of the moment we’re in for 3D –– it’s exploding.”

“It’s a constant stream of new technology,” adds Waddell. Whether you’re magnifying insects to the size of cars, virtualizing fashion shows, creating safety materials or collecting historic archives that can be accessed forever, the technology is here, and DELTA is here to push its boundaries.

When you put student success at the forefront of a university’s strategic initiatives, extraordinary results will follow. That’s the goal of the Quality Enhancement Plan (QEP), which affirms a commitment to enhance overall institutional quality and effectiveness by focusing on an issue important to improving student success.