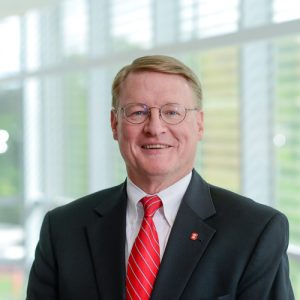 Senior Vice Provost for Academic Strategy and Resource Management
Chief of Staff, Office of the Executive Vice Chancellor and Provost

Dr. Duane Larick is Senior Vice Provost for Academic Strategy and Resource Management, and Chief of Staff for the Office of the Executive Vice Chancellor and Provost at NC State University. In this role, he is charged with assisting the Chancellor and Provost in advancing institutional level strategic initiatives including strategic planning, academic planning, enrollment planning and resource management. He is also a professor in the Department of Food, Bioprocessing and Nutritional Sciences.

In 2013 he moved full time to the Provost’s Office in his current role. He currently serves as NC State’s liaison to the Southern Association of Colleges and Schools Commission on Colleges (SACSCOC), the university’s regional accreditor, and serves as a member of the SACSCOC Board of Trustees. Larick received his bachelor’s and master’s degrees from The Ohio State University, and his Ph.D. from the University of Missouri, Columbia.